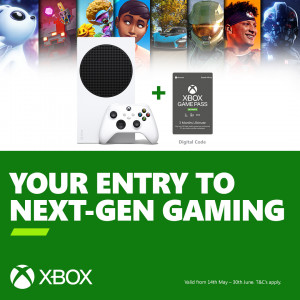 Pay over 3 EQUAL zero-interest instalments of R2,333.00 with PayJustNow.
Find out how...

Here’s how it works:

PayJustNow allows you to pay for your purchase over 3 equal, zero interest instalments. You’ll pay one instalment at the time of purchase, the next at the beginning of the following month and the last one a month thereafter.
#zerointerest

Browse your favourite online stores and proceed to check-out.

Choose PayJustNow as your payment method.

Create your account as easily as if your eyes were shut (though we’d recommend you keep them open).

Complete your purchase and whoop for joy!

Introducing the Xbox Series S, the smallest, sleekest Xbox ever. Experience the speed and performance of a next-gen all-digital console at an accessible price point. Get started with an instant library of 100+ high quality games, including all new Xbox Game Studios titles like Halo Infinite the day they release, when you add Xbox Game Pass Ultimate (membership sold separately). Seamlessly move between multiple games in a flash with Quick Resume. At the heart of Series S is the Xbox Velocity Architecture, which pairs a custom-SSD with integrated software for faster, streamlined gameplay with significantly reduced load times.*

* Use with digital games only; console does not play physical discs.120 FPS:  Requires supported content and display; use on Xbox Series S as content becomes available. 4K streaming: with select apps, see Xbox.com. Some apps require app provider-specific subscriptions and/or other requirements.